Today we have near gale force winds at New River Inlet.     But there are model simulations to work up.     As readers will recall, the FRF did a recent (Apr 16/17) bathymetry survey after the dredging of the main channel.   The upshot is that the main channel is still very shallow and narrow.     We have done two test dye releases (see earlier posts).   In contrast to model predictions based on bathymetry ~ 1 year old (see earlier posts w/ NEARCOM tide / drifter  and Delft3D tide / dye  results) where there is a strong tidal jet that strongly advects stuff many km offshore,  the dye both time just ooozed over the southern ebb shoal or out the new channel and northern part of the shoal.    Clearly there was no strong tidal jet.     Also,  Britt & Steve also have found that tidal velocities are basically in phase with tidal elevations, ie, progressive, whereas the models were predicting a 1.5 hr lag (half progressive/standing).   So both NEARCOM and Delft3D are being re-run with the new bathymetry.   Here are some preliminary results from Delft3D run with just tidal forcing and a dye release.

First analysis of the tides.   See the image below.   Contrast this with the analysis on older bathymetry 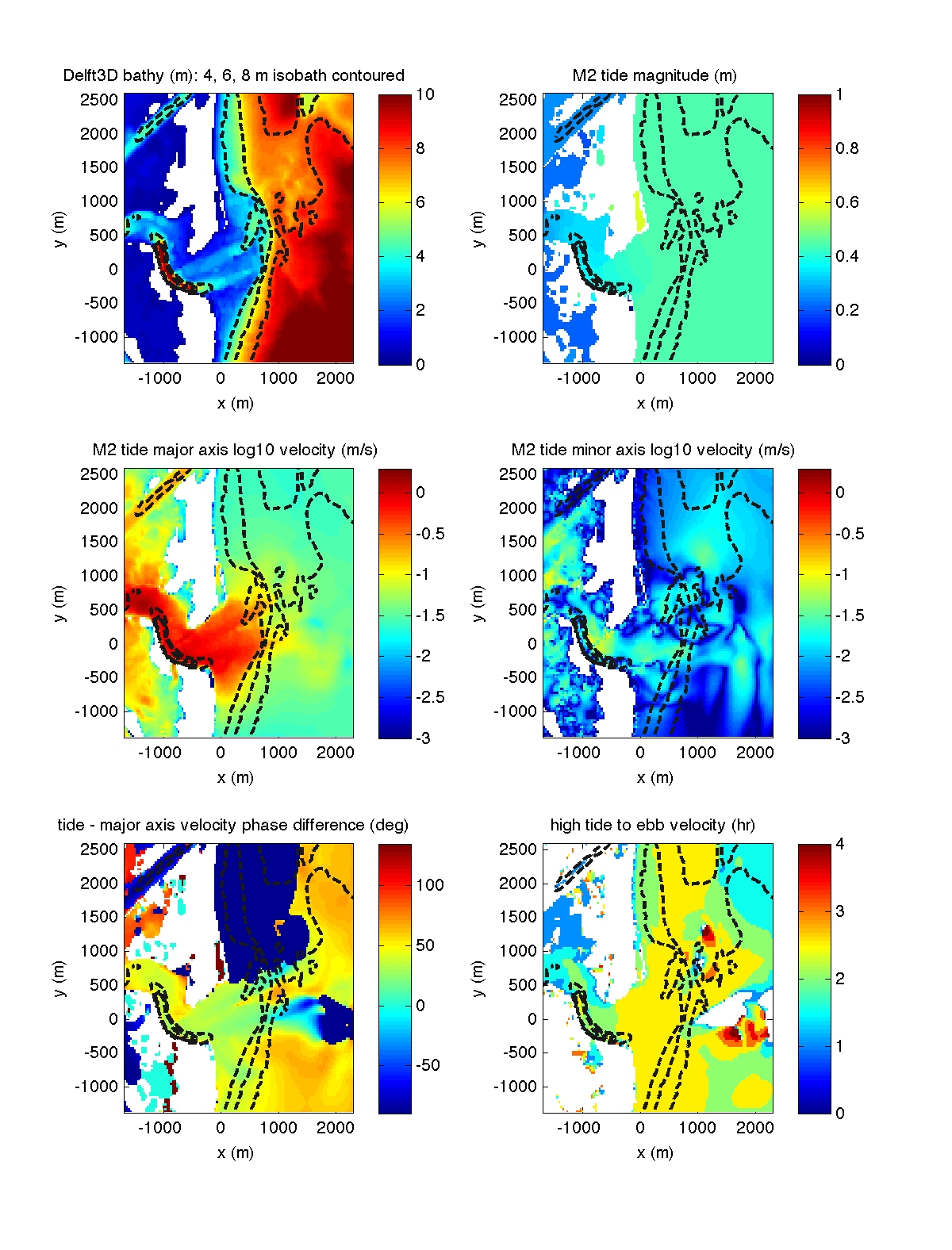 As can be seen the tidal velocities are very strong inside the inlet but decrease rapidly at and offshore of the shoal (not here log10 velocities is colored).   Bathymetry contours (4, 6, 8 m depth) are shown as dashed.

More interesting is the dye simulation.   Now ~42 hours (previously only 20 hours) of the model has been finished, however this dye simulation is very different from previous simulations on the old bathy. See the youtube video below. It is clear that the dye behaves very differently oozing evenly out over the entire shoal rather than in a jet.   The dye does not make it as far offshore.    This is qualitatively consistent with our preliminary dye deployments.   Note that there is no wind or stratification in this run.  All the other model parameters (eddy diffusivities, etc.) were the same as the previous run.

For ease of comparison, take a look at the dye simulation with the old bathymetry but the same conditions (below). Clearly quite different.