Yesterday (May 6th) was the first day of dye releases.    Although we had a couple of glitches things overall went very smooth.   In the AM we deployed 15 fluorometers (measure dye concentration) at the SIO and WHOI current meter locations.   Combined with the velocity measurements, this allows one to make flux measurements of dye out or into the inlet.    The NPS/RSMAS crew set up their mooring and catamarans.    The SIO-MPL guys got their REMUS into position.   The dye pump was calibrated (see image below) for the exact length of tubing to be used.   That is a 30 gallon drum of Rhodamine WT! 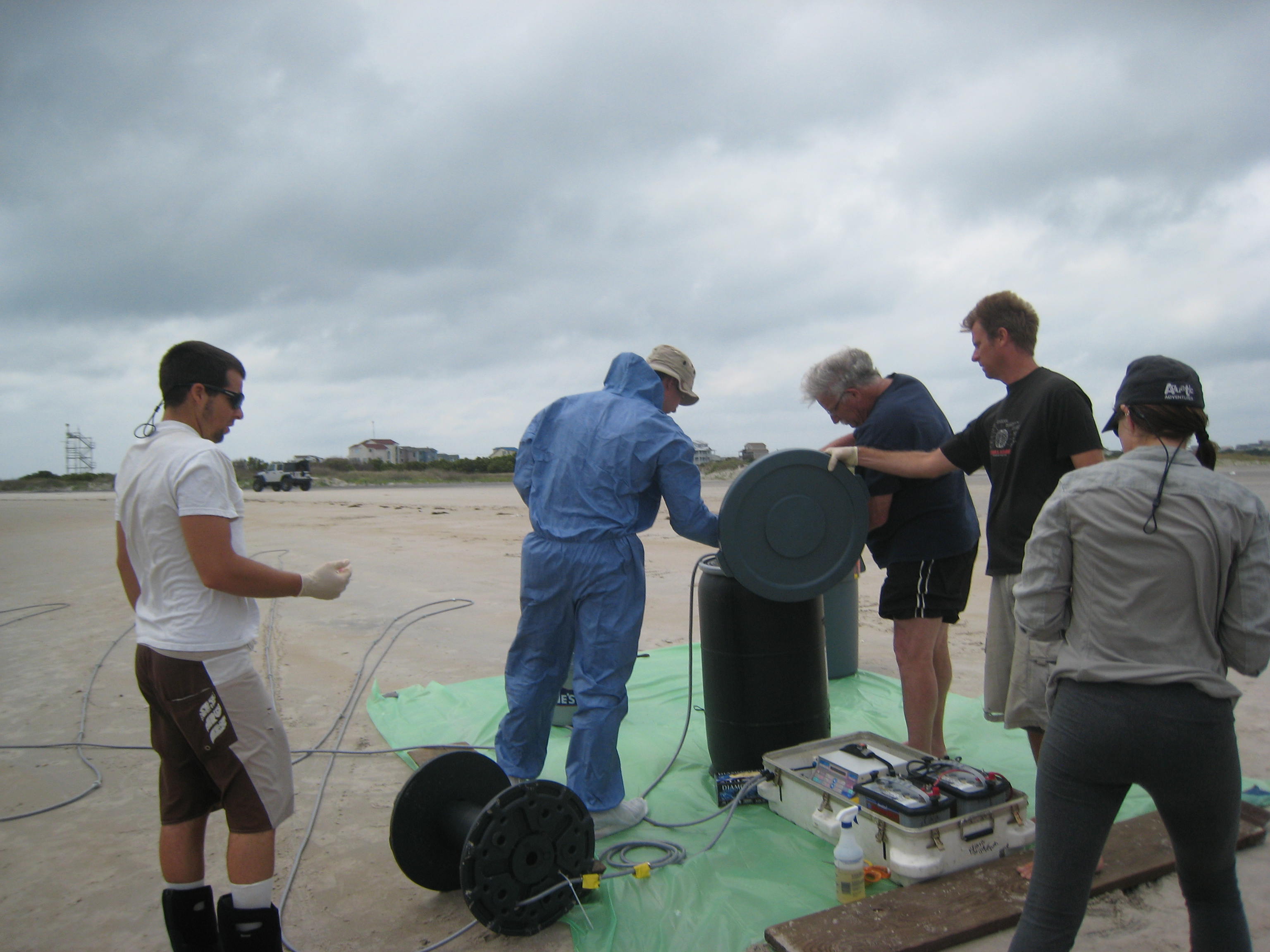 Dye release began at 1245 at a rate of 21.6 gallons per hour.  As the tides are in a spring phase right now the tidal currents were very strong, and in < 10 minutes dye had gotten to the entrance of the main channel.   Below is the view from HQ which looks out over the main channel (to the left) and the SW ebb shoal (to the right).   It is pink!

After about 1.5 hours, the entire 30 gallon drum had been released and the dye pump shut off.   The tidal inlet experiment, then quickly became an inner-shelf experiment.    We had jetskis, REMUS, boats with CTD and towed arrays, and an airplane sampling the dye plume as it advected towards Surf City.   Below is an aerial hyperspectral image from Luc Lenain of the dye patch (note this is not a final product just a quick and dirty first cut). 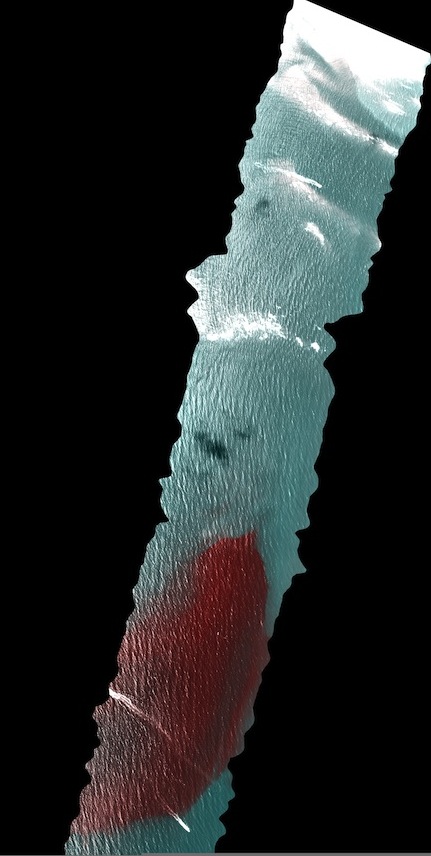 One issue that the airborne observations had was the shadows due to the clouds.  But the dye patch can clearly be seen in the image.   Also note the boat wake.

The NPS boast and our Sally-Ann were also doing CTD casts.  Below are some images from the CTD casts in the dye patch.   The first is earlier on and measured 7ppb near the surface and a strong dye, T, and salinity -cline at 4-5 m depth.    Near the bottom there is no dye. 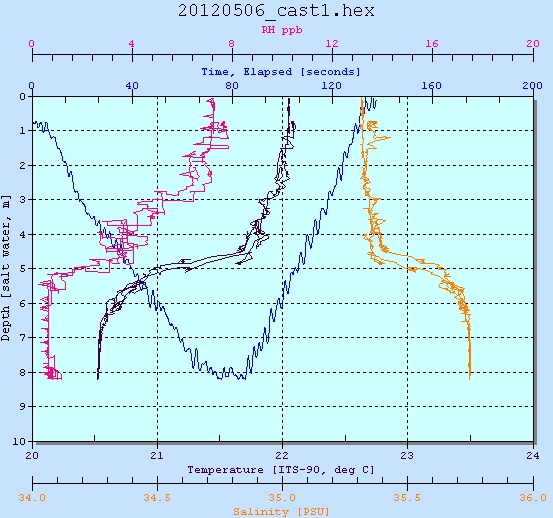 Sometimes however, dye was maximum in mid water column.  See the image below. 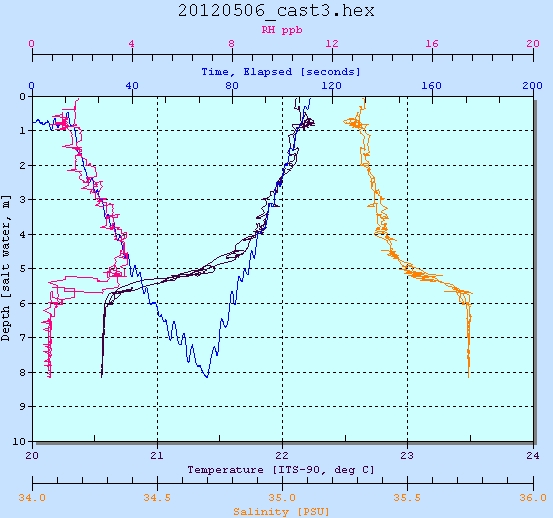 The MPL REMUS was also hard at work out there.   Below is an 3D(lat, lon, and Z) of offshore plume dye concentration. 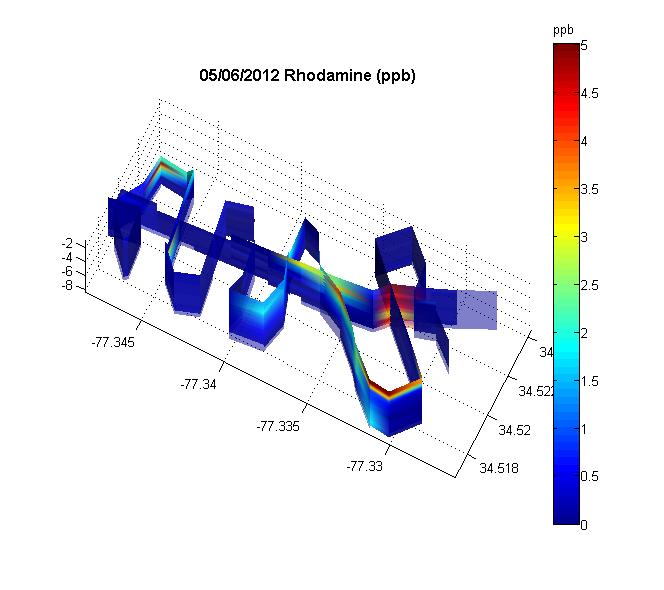 REMUS dye concentration as a function of lat,lon and z (courtesy of Billy Midleton, Eric Terrill, and the MPL team)

Lots of good stuff on day 1.  There is a ton of more data collected by the NPS/RSMAS guys and our ski and all the moored and tripod instruments.     Day 2 dye release begins at 1230