Today (Sunday May 13th) is instrument turnaround day and general catching up.    We also have a report on the dye-bomb release we did on May 11th.   In short, it was an amazing dye of observing the ocean.     The RIVET community had many assets in the water measuring dye, currents, temperature, and salinity.   Here we’ll focus on a few observations to give a quick overview of what happenned during the day.

In contrast to the previous releases where we continuously pumped dye for 1.5-2.5 hours, this time we poured 20 gallons of Rhodamine WT at ~0800 into the inlet 300 m down from the junction with the Inter-coastal waterway.    Below you can see the dye getting poured in. 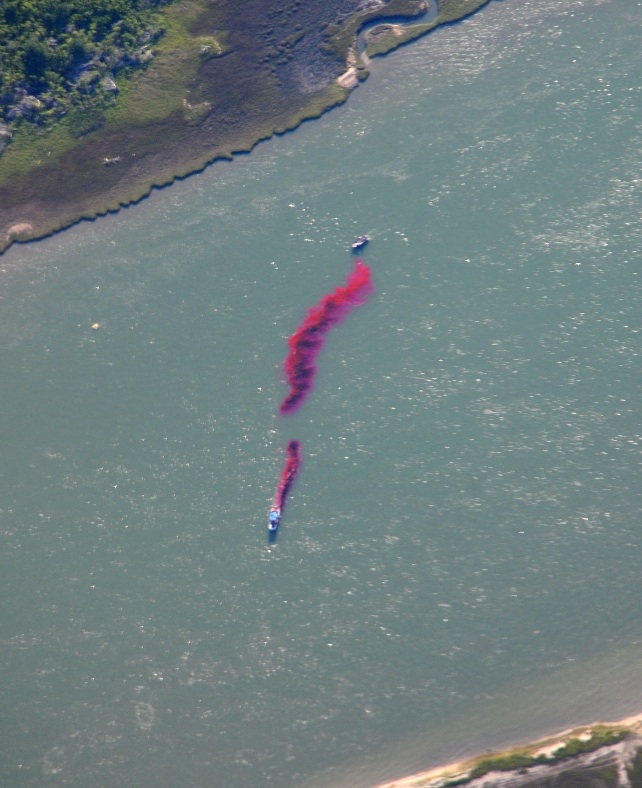 Aerial photograph of Rhodamine WT dye poured into the straightaway 300 m down-inlet from the junction with the Inter-coastal waterway.

As the tide was ebbing rapidly the dye gets stretched and stirred rapidly.    It is quickly well mixed (confirmed with CTD+F) casts and makes its way down the inlet.   As it approaches the inlet mouth, the dye has spread all the way across the inlet and (in contrast to the point releases) the dye moves out both “old” and “new” channels. 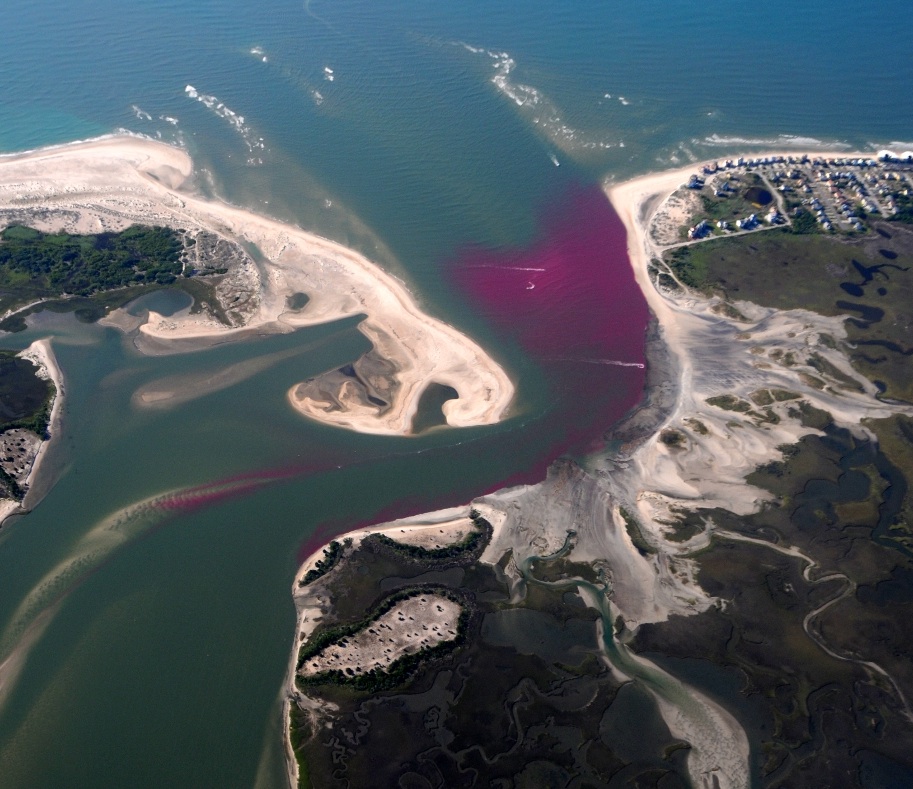 Dye patch as it approaches the inlet mouth. Notice the two heads moving towards the old and new inlet mouths.

The conditions on May 11 were very benign.   Very small waves and extremely light winds during the entire release.   The dye then gets rapidly ejected offshore out of the two channels and the SW near-beach channel. 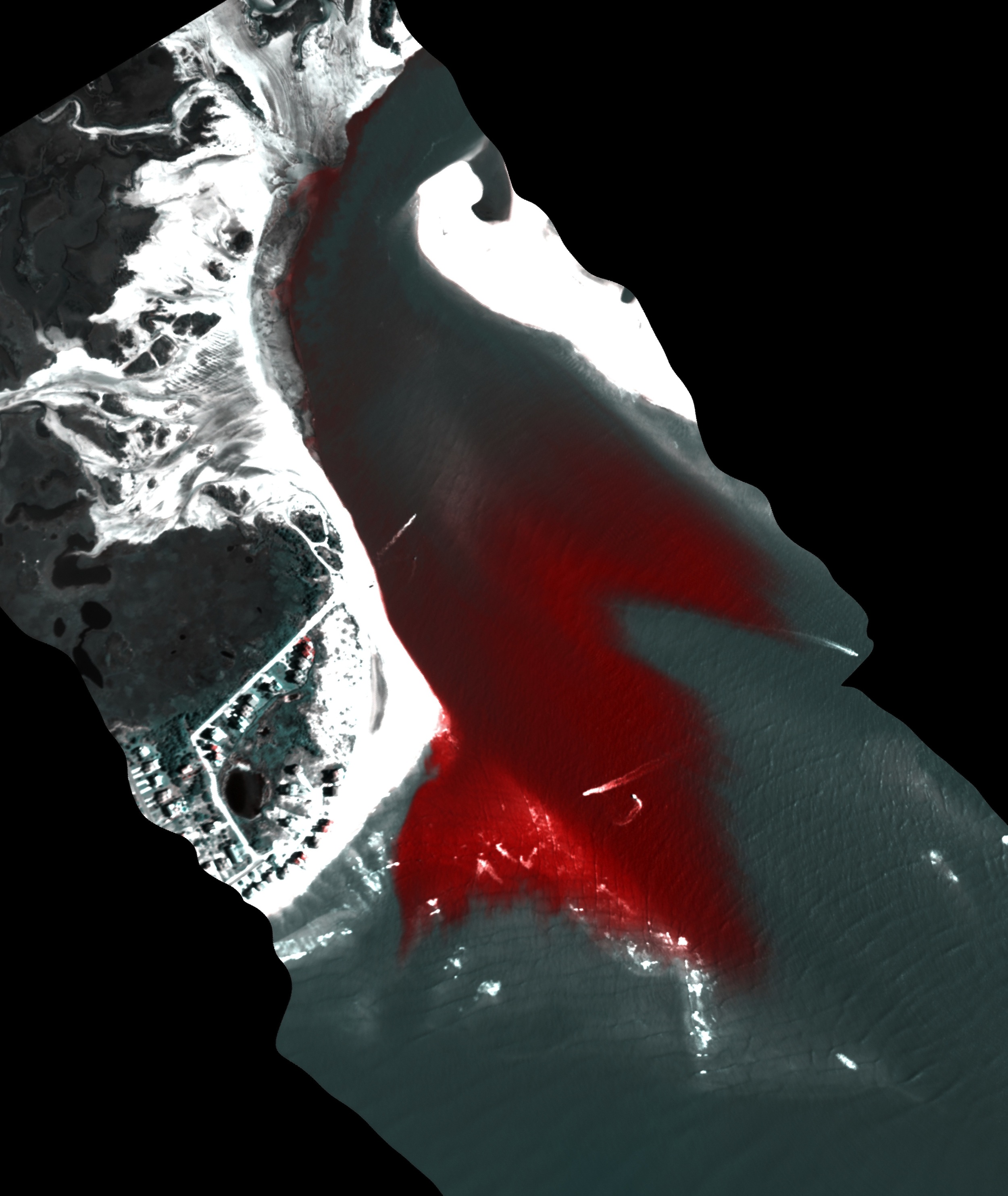 Hyperspectral image of dye taken at 1256 (local time) as it ejects out of the inlet in 3 pathways: the SW near-beach channel, the main channel, and the old channel.

By shortly after 0900 dye is clear of most of the inlet. CTD+F casts offshore of the main or “new” channel reveal a surface concentrated (< 2 m) dye field of about 20 ppb with no dye at all below.  This is associated with a strong halocline.  This is in part due to the weak mixing that is induced due to the light winds and lack of waves and whitecapping. See the figure below. 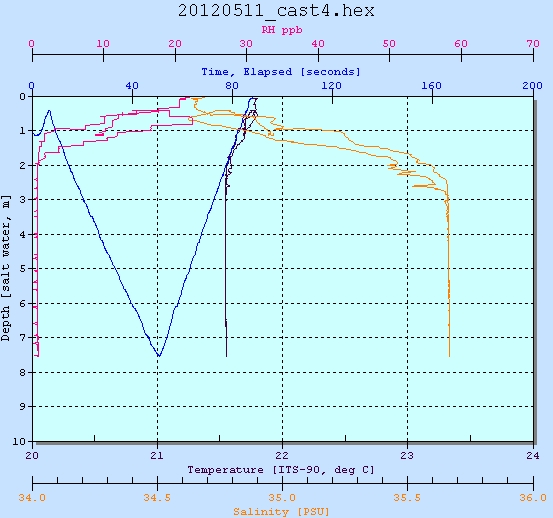 CTD cast of temperature (black, degC), salinity (yellow, psu ), and dye (pink, ppb) in line with the mouth of the main or "new" channel.

The fresher water of the inlet simply slides on top of the saltier (and slighly colder) oceanic water.   Thus forming a “lens” within which the dye is contained.   The weak winds likely contribute to the maintenance of this strong water-mass gradient.    These type of vertical structure conditions will be a very significant challenge for models to reproduce as a) they may not have enough vertical coverage and more importantly b) the model-induced mixing is often far too strong to maintain such a gradient.

The tide then starts to flood at ~1000, and begins to pull water back from “old channel” 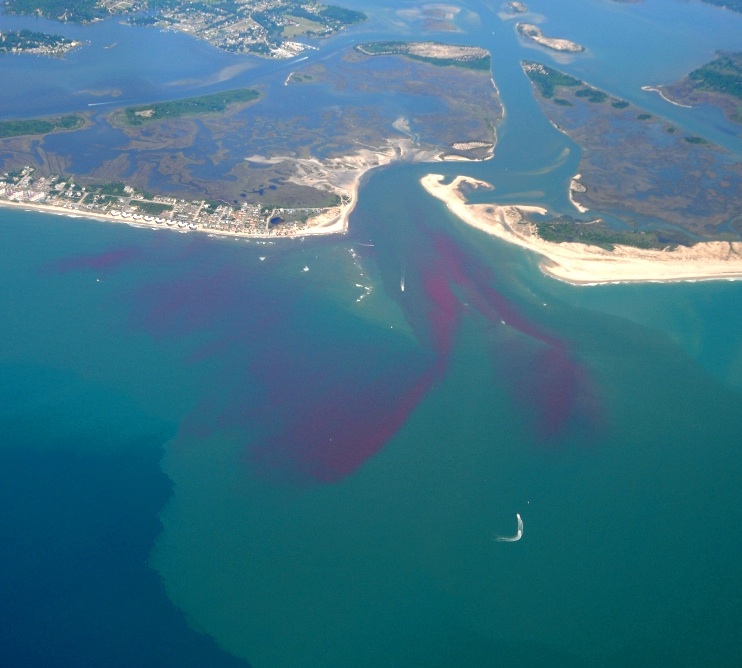 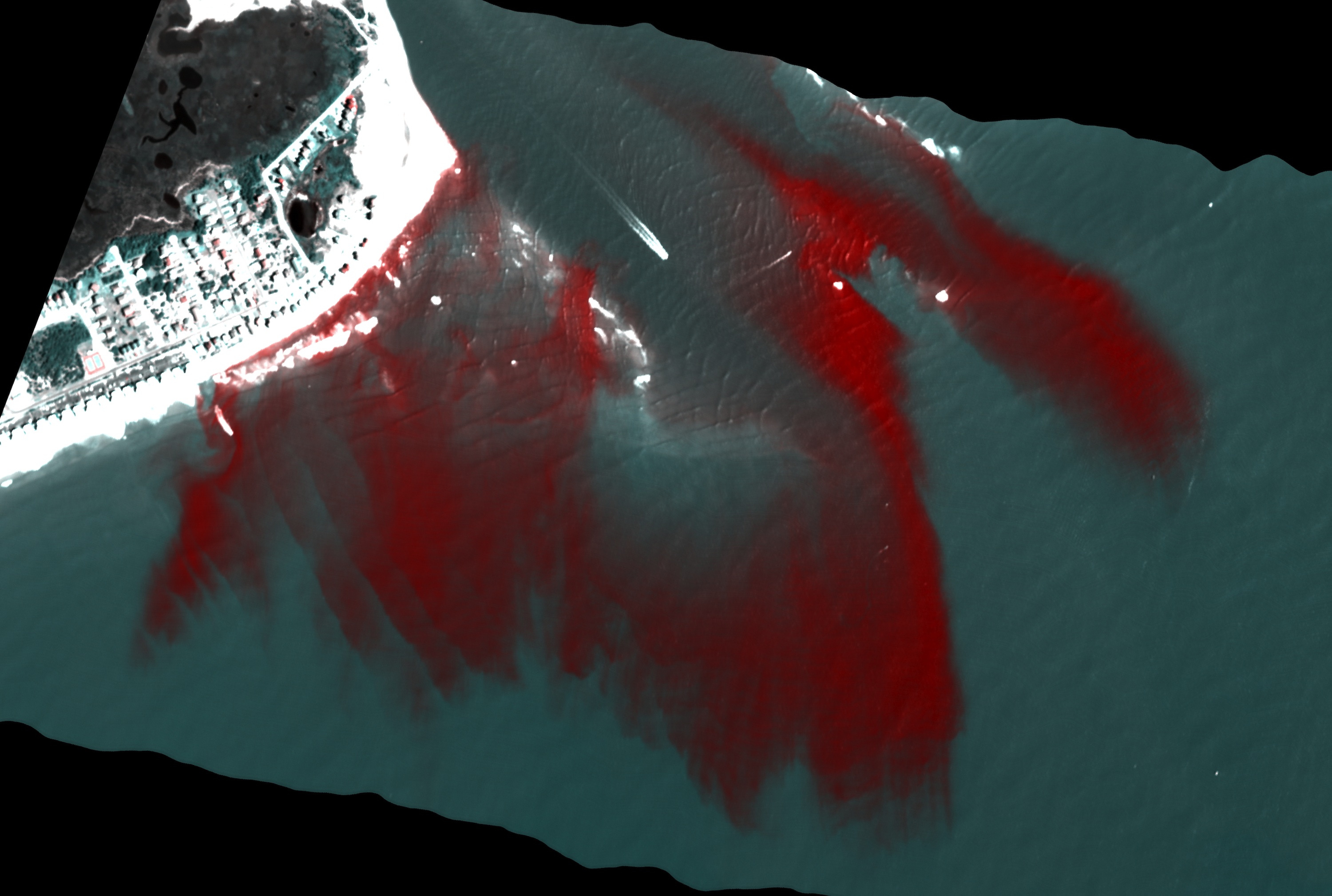 Hyperspectral image of the dye at 1417 (local time) just as it starts to flood. Note the correspondance with the visual image

Notice the wispy dye to the SW of the inlet.   This is all very much surface concentrated.   Often boats and jetskis driving in it left a trail of dye-free water behind.    This was confirmed by the CTD casts, which show an even thinner surface layer of dye with lower max dye.   Dye stratification is again is influenced largely by a strong halocine, but here there is also a stronger thermocline than in the previous set of casts 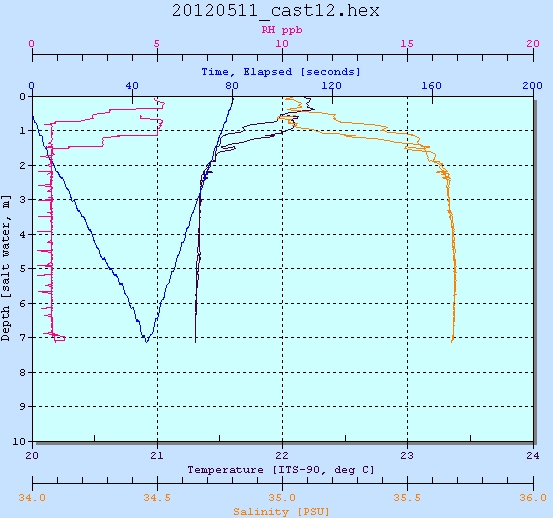 CTD+f cast in the water SW of the inlet. Note the thin surface layer of dye

As the tide started to seriously flood, the dye patch was broken into two parts.  1) an offshore component that spread itself out from the main channel entrance to the SW and 2) a patch that got sucked back up the inlet.    This mostly occured from dye in the “old” channel.   As the dye approached the “S”-turn of the inlet, it converged strongly on the ever-present scum line, just as the drifters had (see previous post).    See the photo below. 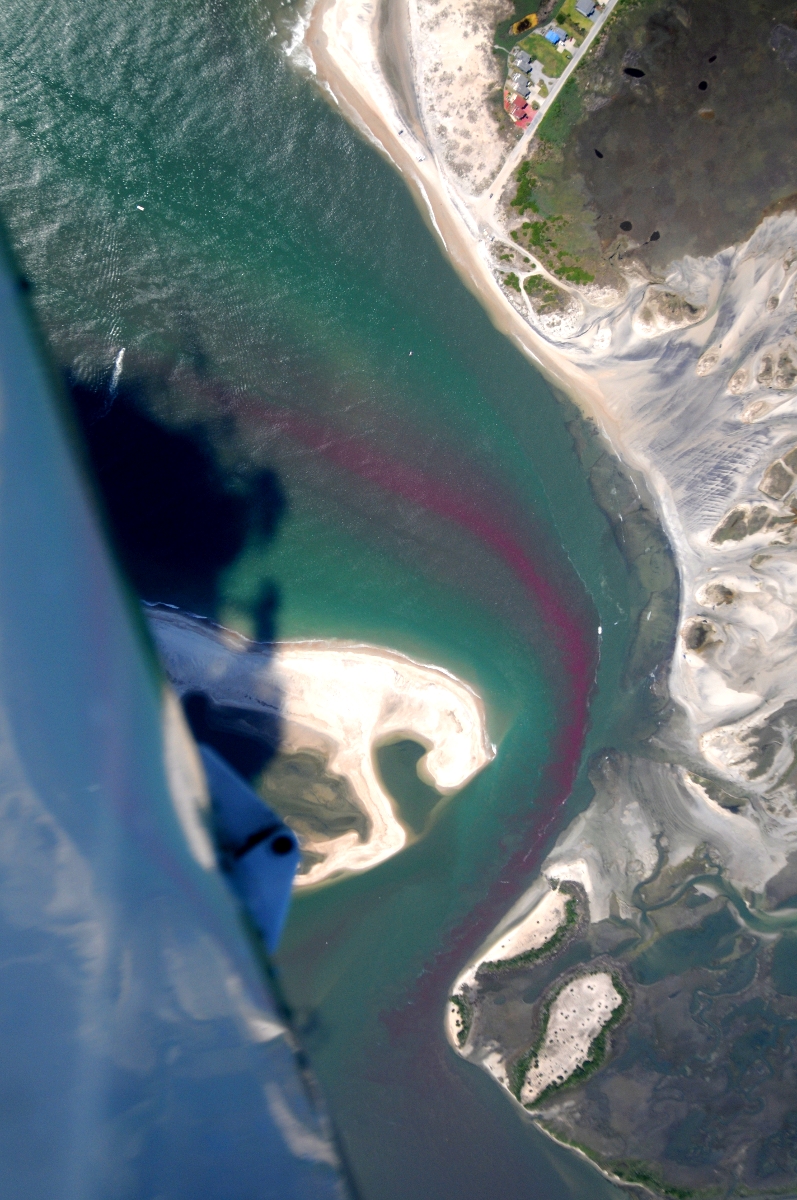 Aerial photo of dye plume convergance near nun 10. This is almost exactly what was observed with drifters.

This sort of “front” will also be a challenge for models to reproduce as the lateral (horizontal) eddy viscosities that they have may preclude the formation of such convergence zones in these rapidly changing regions.