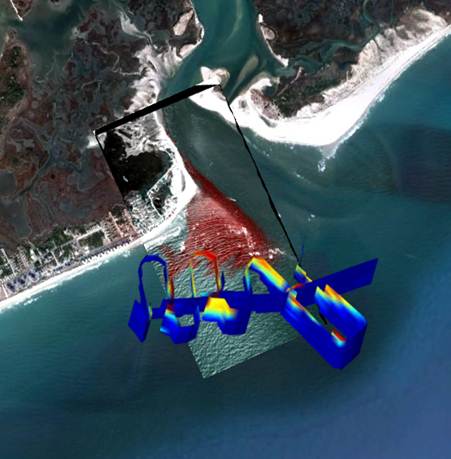 Hello everyone, just wanted to pass along some of the work the SIO CORDC group has been performing offshore with the REMUS AUV.  On 5/8/2012 we ran a REMUS mission supporting the Guza dye release.  We’ve overlaid the Rhodamine signature observed by our AUV on the hyperspectral image taken at 17:39UTC (courtesy of Luc Lenain and Nick Statom). The REMUS was deployed at 17:20UTC and started near the entrance to the new channel and went in a southwesterly direction towards the beach.  It reached the end of this leg at ~17:40UTC(when the image was taken).  You can see from the image that this first leg was outside of the dye signature which corresponded with our observations  The REMUS then performs a mow the law pattern across the inlet.  We first encountered dye at ~17:46UTC and continued measuring the plume until the end of the mission at ~19:00UTC.